At 8 o’clock in the morning of November 21st, the Huizhou 6th Ear Care Project large-scale charity event hosted by Huizhou Third People’s Hospital and Huizhou Ganghui Love Foundation, carrying the strong love of people from all walks of life, was officially launched!

Liu Qingrong, Secretary of the Party Leadership Group and Director of the Huizhou Municipal Health Bureau, You Jingfan, Deputy Governor of Huicheng District People’s Government, Ma Xianli, Director of Huizhou Third People’s Hospital, and other leaders at all levels, experts and volunteers from all over the country, charitable organizations, caring people from all walks of life, About 200 representatives of the beneficiaries and their families, as well as staff representatives of Huizhou Third People’s Hospital, participated in the launching ceremony of this public welfare activity. As a leading company in the hearing aid industry, Jinhao Medical was invited to participate in this event. In the future, Jinhao Medical will also continue to pay attention to and support social welfare activities, and earnestly implement General Secretary Xi Jinping’s advocacy on spreading charity culture to give back to the society and serve the society with corporate power.

The “Huizhou Ear Cong Project” is a public welfare project jointly developed by the Third People’s Hospital of Huizhou and the Hong Kong Ear Listening Heart Words Fund. It aims to help poor ear disease patients relieve their pain, restore hearing, enjoy the world of sound, regain confidence in life, and reduce Family and social problems caused by ear diseases have aroused the attention and assistance of the whole society to the hearing impaired.

As of today’s launching ceremony, this year’s ear hearing project has received more than 650,000 yuan in donations and rescued 17 hearing impaired patients, including 3 adults. In addition, this session will begin to help the 70-year-old. As a result, the Huizhou Ear Cong Project received a total of more than 4.6 million donations, and helped nearly 300 hearing-impaired patients in and outside the province, especially in Huizhou and surrounding areas, of which the total number of hearing-impaired children exceeded 200.

Looking back on the footsteps of the Huizhou Ear Cong Project, Ma Xianli, President of Huizhou Third People’s Hospital, promised: “We will continue to interpret the responsibilities and responsibilities of public hospitals with practical actions, and do a good job in health and public welfare undertakings, as always and wholeheartedly. , For the well-being of the people’s lives and health, and contribute to a healthy China and healthy Huizhou.” 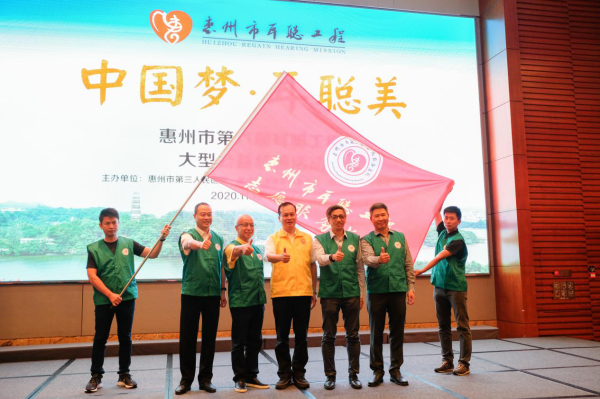 “On the most memorable day, the angel came to me, painted a pair of ears of love, let me hear, I heard love, heard the future…” The Huizhou Ear Cong Project public welfare song “Hear During the MV for “The Beautiful”, many of the audience present shed tears of emotion.

In recent years, the Huizhou health care system has closely focused on the “Healthy China” policy and has gathered all forces to promote the high-quality development of Huizhou’s health care. In this regard, Liu Qingrong, Secretary of the Party Group and Director of the Huizhou Municipal Health Bureau, expressed his hope: “I hope that the majority of medical workers will continue to carry forward their dedication to saving the dead and healing the wounded. Taking this event as an opportunity, they will humbly learn from the top experts from all over the country. Improving the level of medical technology allows a wider group of patients to benefit from the’Ear Cong Project’ and regain confidence in life.”

You Jingfan, deputy head of the Huicheng District People’s Government, pointed out that hygiene and health care are related to a comprehensive well-off, the people’s livelihood, and the people’s happiness. He called on more caring companies, social organizations, and caring people to actively participate in public welfare and charity, and strive to be practitioners of contributing to society, so that Huizhou is full of love and hope. “I hope that more companies and people will work together to make contributions to the cause of health and poverty alleviation.”